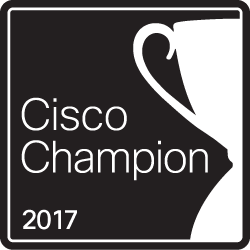 "Cisco Champions are passionate about Cisco and happy to share our knowledge, experience, and feedback."

Find passwords with space sign at the end:
sh run | i _$

Show interface config only:
sh run | s int
Note: you can't use sh ru | s i because "i" in this case means "section include", also as "e" means "exclude"

Use short and informative route-map names, for example:
route-m c2e
to describe route-map for redistribution from connected to EIGRP.